GIVING BACK TO NCC

Communication Arts Instructor Laura O’Connell was a shy person when she followed the advice of her high school guidance counselor and signed up to become an orientation leader at Nassau.

At the time, O’Connell says she was reluctant to go to Nassau, having bought into stereotypes about community colleges. “I thought it was the ‘13th grade,’” she recalls. But once she became an orientation leader, that changed.

“I met so many wonderful people — from students to faculty and staff.” 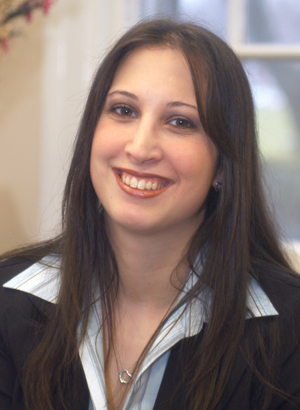 FROM STUDENT TO PROFESSOR

O’Connell continues to be impressed by the caliber of people she is surrounded with everyday, now that she is a member of the Communications Department faculty. Her colleagues, she says, are “passionate” about teaching — and bringing “the utmost academic quality to the classroom.”

The once-timid student is now teaching COM 103: Public Speaking, among other subjects. She credits the advisor she met as an orientation leader, as well as NCC students and classes, for helping her break out of her shell. She went on to become an extremely involved student leader, serving as president of Programming Board, publicity chair of Nassau Concerts and arts editor of the student newspaper.

“I owe a lot of my successes in life to my involvement as a student leader,” says O’Connell, who holds a master’s in Speech and Interpersonal Communication from New York University.

“I have had an amazing experience here as a student and I’m now experiencing it from the other side as a faculty member,” she says. “To be able to give back what I received makes me overjoyed.”