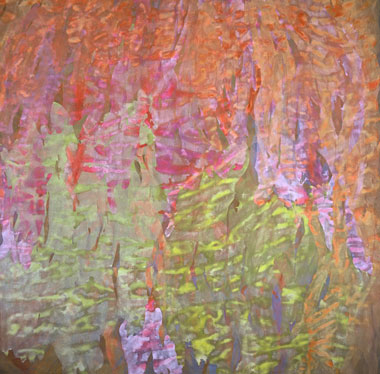 Nadege Monchera-Baer’s artworks are usually developed in series that follow one of two paths: one being abstract and painterly, the other being conceptual and figurative. Like a biological species that inhabits two different habitats, the two lines evolve on their own, seemingly independent from one another. And just like the messiness of real evolution, on occasion the boundaries between the two sub-species gets blurred as a series or individual work will pop up that crosses and merges qualities of both. Then just as quickly as it began, mixing time is over and the two paths will diverge, presumably to meet somewhere else further down the road.The figurative art ranges from charged portraits to more conceptually tinged psychological studies hinting at internal or conflictive socio-sexual issues such as innocence and deference. Though not referenced in the titles, some of the artworks are images and self-portraits sourced from actual family photos. 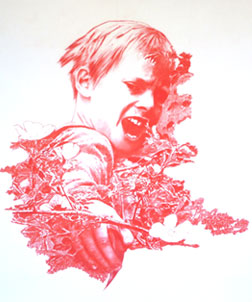 Comparatively speaking, her earliest roots and longest running series belong to abstract painting, where connections, repetition, atmospherics, emotion and most importantly color itself form the essential components of her exploration.Over the years many aspects of color, media and composition have continued to evolve and change but what seems to stay relatively consistent is a certain methodology. Whether it be on large canvases or “hatchings” on mylar, the handiwork tends to be detailed and intensely immersive. Likewise as a matter of habit and inclusion, she most often works on multiple abstract series simultaneously. Ignoring the when and where of execution, organizationally these are most easily grouped by size and media. Meanwhile the conceptual work also develops in series but more often in fits and starts that are only recognized in hindsight as various ideas rise and submerge. For example, though the exterior styles vary greatly and the path from the head and hair (or blood?) of Woman not sleeping to Touchable (Indian Boy) is not immediately traceable, yet when put side by side a connection and commonality bonds the two. At the same time one clearly sees the manifestation of her abstract works in the gesture and coloring of the woman/dreamer’s hair. Likewise for the almost arbitrary orientation of the subject’s pose which seems to owe more to ethereal abstraction than any realm of gravity and earthly order.With permutations, this interplay of balancing acts and interconnectivity appears intrinsic and never-ending. A series of skulls that obviously belong to her figurative musings share visual dynamics that lie deeply entrenched within her ongoing forays of abstraction. Yet at the end of the day, when all is said and done, one wonders whether anything at this point is more poignant and layered in both meaning and mystery than the self-portraits of the little girl with a lifted dress or costumed bear. If this is so, then in defense of the open-ended narrative, it will certainly be best to forgo the printed word and let the pictures speak for themselves.